Stephanie Stalls – Bust you in the face!

Bust you in the face! 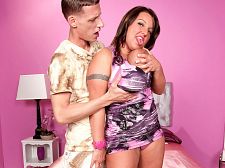 Born in Tennessee, Stephanie Stalls lives in Kentucky and can often be seen shaking her big tits and grinding her hips on-stage at Jill's club in Wheeling, West Virginia.

"This time I'm back at SCORE, and it's been amazing because I got to do something I haven't done before, which is have sex on-camera" Stephanie said about this video.

I remember it took a while to arrange this hardcore shoot, but it worked out in the end. Not Stephanie's rear-end. That would take another visit five months later.

Stephanie could be a kissin' cousin of Angel Gee. Even their measurements are almost identical. I would have liked to see the two of them take on one guy.

A big-bust feature dancer is an endangered species on the strip club circuit these days. Once, there were dozens of them criss-crossing North America. No one has emerged to replace them, so Stephanie is one of the few huge-chested strippers in America. I urge you to go see her shows.

"I'm really aggressive with my dances, and the guys love it," Stephanie said. "Every so often, I'll go a little slow and be sensual, but I like being aggressive. I'm the same way in sex, although making a video with a stranger is a lot different than having sex in your home."