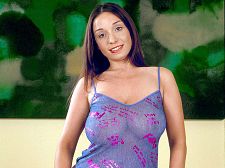 The party girl isn't partying anymore. Her modeling days are behind her. Fortunately, we still have these photos and videos to remember British beauty Michelle Bond by. Elliot once called her "the ultimate British girl-next-door." But I doubt that many girls-next-door did the things Michelle did when she was living in Spain.

"I worked for a particular club as a showgirl," she said. "It was the world's biggest nightclub, and we did different shows, and my part every Monday night was to get dragged onstage, handcuffed and naked by a dwarf. It was wild, but it was fun, and the crowd always got a big kick out of it. Every Monday night, handcuffed, naked in front of a thousand people. "

The club was Privilege in Ibiza, off the coast of Spain. The show was called "Manumission."

Michelle's boobs were borderline big enough for SCORELAND when she started modeling at age 21. By the time she was 30, she was destroying H-cup bras. She told us, "As my body has kind of grown a bit, they've grown with me. The only thing that's different between now and years ago is that I don't party as much. I used to be stick-thin, and my boobs weren't that big because I partied a lot, but now, I don't know. I haven't done anything to them. They've just grown. I used to be an F-cup. And they just grew and grew, and every time I got measured, they seem to have grown. Either that or my underwear is shrinking!"

Michelle was one of the greats.