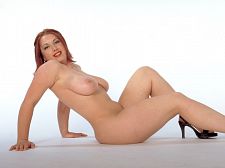 In 2002, Katt Messina was pouring drinks at a nudie bar in Michigan when a V-mag reader saw her and said, "You oughta be in a nudie magazine." That's the kind of thing you can say to a chick when she's tending bar in a place where women are taking off their clothes. She won't take offense. She'll probably take it as a compliment. After all, she's only a few steps away from being a stripper herself.

Anyway, since there's no such thing as a nude bartender and Katt didn't want to be a stripper, she sent in her test shots to The SCORE Group and made her international nudie mag debuts in the October 2002 issue of SCORE and the November 2002 issue of Voluptuous.

"There was this guy I had a couple of classes with in college, and he came up to me and said, 'Nice breasts,'" Katt said. "He really raised my self-consciousness about it, and then I became really fat, about 175 pounds. After I graduated, I became very active and lost weight, but I didn't lose my boobs. I used to be shy. I always low-keyed the way I dressed, but then I became comfortable with my body and less shy. Now I like to show them off. I'm proud of my body."

Katt said she started developing when she was 15 years old. "Before that, I had nothing."

But this redhead ended up with beautiful E-cup naturals.

To the best of my knowledge, Katt never modeled for anyone else. She never did hardcore. She was all ours, thanks to an observant reader in a titty bar.