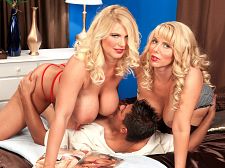 "Before I walked into the studio the first time, I really, honestly did not think I could pose, and coming in and having such a good time and seeing the magazines, definitely, I couldn't believe it."

That's a quote from Kelly Christiansen, the gorgeous wife of a SCORE reader. The epitome of the strapping blonde built like a brick shithouse, Kelly is up for entry into the SCORE Hall of Fame. I hope she wins. Then I hope she returns to model again because she was so hot and sexy.

The pairing of Kelly with another strapping blonde named Karen Fisher is a perfect pairing for this fantasy. They're both superwomen, bigger-than-life. Together, they gave this dude Sergio a hard time.

He plays a reader looking at an issue of SCORE. He pauses on a photo of Kelly. When he looks up, twin tit-mates Kelly and Karen in lingerie are standing next to him. "Isn't this what you wished for?" Karen asks. It's what every straight dude wishes for.

Kelly's husband had no issues with strangers fucking his wife in the safe environment of the studio. They watch her scenes at home.

"He likes watching me with other guys and he likes the idea that his wife is a star," Kelly said. "We're not swingers. I do like to watch myself have sex, and every time I see myself, I can't believe it's really me."