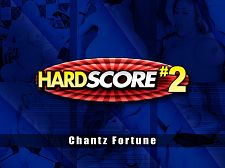 In 1999, Randi Rushmore made her debut in the July '99 issue of SCORE and said, "I wanted to start feature dancing earlier, but I had all of my costumes stolen. Now I'm ready to go!" Randi had actually appeared in SCORE in 1995 in a candid Boob Beat column photo taken at the 1994 Gentlemen's Club Expo. Randi wanted a layout in SCORE and finally got her debut in 1999. By then, she had changed her stage name to Chantz Fortune.

"Then I went from being a goody-two-shoes, Bible-thumping, I'm-staying-a-virgin-until-I'm-married to losing my virginity, being a dancer, boom, boom, boom-overnight."

Chantz talked about blow jobs. A shame this was not recorded on video.

"I like to use my tongue piercing to suck dick. I initially got it for eating pussy. I didn't think I needed assistance for sucking dick but I thought it could always come in handy for eating pussy. But actually, it's not close enough to the front of my tongue, so I've thought about getting a second one for girls, but this is more for men. Some guys can't stand them but a lot of the guys like them or I've put like French tickler thingies over it, which gives a cool sensation."

Chantz enjoyed the action for as long as it lasted for her.

"I love it now. I love what I do. I love entertaining. I love the whole stage thing. I love being behind the camera, I love being in front of the camera. Until either I get bored of all of this, and I don't know how you could, or until my knee decides it doesn't want to dance for me anymore."