Cat Bangles – Sex With A Covergirl

Sex With A Covergirl 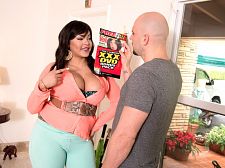 The postal carrier has screwed up and left Cat Bangles' mail at JMac's house. The usual junk mail plus one plastic-covered Voluptuous magazine with Cat on the cover. Being the gentleman when a hot lady is concerned, JMac promptly knocks on her door and is invited in by an excited Cat. She loves seeing her pictures in SCORE and Voluptuous. She collects her mags.

Cat tells JMac he can open the wrapper and look inside. That he eagerly does. It's his second time meeting Cat. He was her first on-camera fuck but there was nothing he could teach this hot pussycat from Boston about being bad to the bone.

Said Cat about her first time ("Hot Cream For A Cat"), "His cock was huge. I kept saying how he was so big. But I took it all. He loved it, of course. He said it was awesome and that my pussy was nice and tight. Nice and tight like a little star. It was a great scene. But I took it all down my throat. He couldn't control himself. He had to stop to keep himself from coming. He tapped out three times, actually. I've heard that he's never met his match and that he's been having sex with girls on-camera for a long time. Apparently, a lot of girls can't handle him. He couldn't handle me with my tight pussy, wet mouth and these tits."