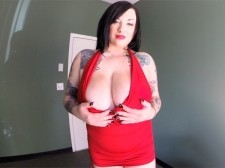 "I like guys to get a little aggressive with my boobs. Because they're so big, they need strong hands. I like a good grasp." She digs her fingers into the front of her breasts as an example.

"I like using my boobs as weapons. I like to slap guys in the face with them. That usually surprises them. But it not going to hurt that bad."

"I love nipple biting. That's probably one of my favorites. I can also bite my own nipples," says Scarlet, holding her tit between her teeth and pulling.