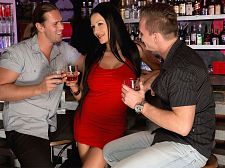 Tom gets first dibs on fucking Patty's pussy from behind while Matt feeds Patty man-sausage. On the bar, on the bar stools and on the floor, Patty is cocked every which way. Miss Michova is in secure hands and she gives back as hot as she gets! The proof is in these nut-busting photos. Threesomes could become a way of life for this brunette sex goddess.