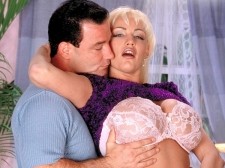 "I grew up in Los Gatos, near San Jose, California, a little surfer chick," 40FF-cupper Nikki Diamond said when she came to Florida to model for SCORE. "I was a Miss Texas at 18. Guys were always hitting on me, but I was more interested in horses and cheerleading. I was a house girl at the Men's Club in Houston, Texas when an agent convinced me to become a feature dancer. I resisted, then I decided to try it and I don't regret it. I like to show my body to men, and I have a nice time doing it."

Nikki won a slew of dancer awards in 1999 and 2000, and I think that's how she met a SCORE photographer. That or her agent referred her.

But cock was a different story. Even though she loves cock, Nikki wasn't so sure she wanted to put it out there on video. It took a while, but she eventually decided to try two scenes with dudes.

Last I knew, Nikki was living in New Orleans, but that was a while ago. We haven't heard from her in years and no one I know has seen her in a long time. She never shot anything else for any other companies. I thought at the time that she'd go to Los Angeles and start a porn career, but she never did. She sure had the right stuff for it. Maybe Nikki got married and settled down. That's what I think happened. Or she'll pop up at a strip club and a SCORE fan will recognize her. That happens now and then.