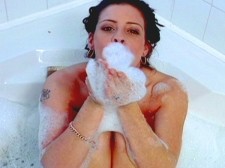 Even the most veteran fans of Linsey Dawn will probably not remember this shower video photographed in her flat in London! It's a nice chunk of reality caught on tape. Shot in 1996, Linsey has begun to overpower the big-bust world in one take-down starting with her December, '96 SCORE cover. After her shower, she dresses her incredibly sex body. We see another rare glimpse of her bedroom. (The eagle-eyed with a computer for a brain will recognize the checkered jacket she wears over her tight dress and her white platform heels. She wore them in the London café scene in Linsey Cums of Age.) After dressing, Linsey has a fast breakfast in the kitchen while she waits for her taxi. Then she's off to her photo sessions!