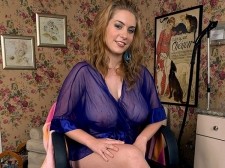 When Kali tries on tight tops it's kind of difficult for her to stuff her huge hoots into them. She tries, though. But in the end, she can't contain them and they bust right out of their constrictive prison. She uses the fact that she is topless to her advantage and decides to give her man a sloppy tit fucking. But all that titty fucking doesn't satisfy her fuck lust, so she hops on his cock and rides it, hard. Trying on tight tops is forgotten once this guy tries Kali's tight pussy on his dick. The lesson learned here is that less is more, meaning, the less clothes that Kali has on, the more dick she can get. We think that for all big-titted chicks, that is pretty much a rule to live by.