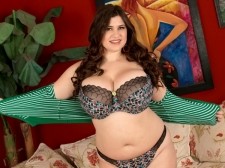 We can state with absolute certainty that Jennica Lynn is one of the greatest sweater girls in the history of the world. Fact! This video and photo spread prove it. Those who dispute this will have to provide substantial evidence to the contrary.

Covergirl of February 2014 Voluptuous magazine and March 2014 XL Girls, Jennica lays waste to the belief that all women are created equal. The Swedish charmer has bigger-than-big beautifully shaped M-size boobs that weigh a total of12.5 pounds or five kilos. "I used a belt to a bathrobe to tie them up and used a scale to weigh them," Jennica explained. "I was interested. They're heavy. I wanted to know how much they weigh."

Anyone who attempts to come close to Jennica's sweater show is going to have the challenge of challenges on her hands because this is one of the all-time greatest. This is the Olympics of sweater-boarding. Jennica peels off everything after her sweater show because, as she says in the video, "Clothes are so overrated." And Jennica owns the camera when it's aimed at her. She has that rare way of making you feel as if she is directly talking to you in her incredibly sexy voice.