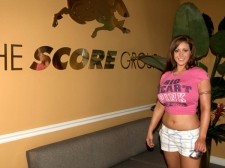 Eva Notty (pronounced "Eh-vah") was originally a Naughty Neighbors girl in 2004. Five years after her NN pictorial, Eva was encouraged to send her photos to BeAScoreModel.com.

"I posed for Naughty Neighbors that one time, but that was it," said Eva. "I never put it out of my thoughts, but I never really thought about pursuing it. That was just one thing I did for fun. But a friend pursued it and asked me if he could submit my photos, and I said okay, and he did. And then somebody from your studio called me, and you wanted me to come in. I didn't hesitate."

Eva's first SCORE magazine, a cover issue, was December '09. Her beautiful body and face and her big boobs knocked everyone out. The mail poured in.

Eva was voted SCORE Model of the Year for 2010. She's appeared in 12 DVDs, a SCOREtv Holiday Special and 14 magazines. She was voted #11 in SCORELAND's 20th Anniversary contest. A tall girl who's over six feet in heels, Eva is one of only six American girls to be voted onto the 20 for 20 list.