Cherry Brady – Wac it to this army babe

Wac it to this army babe 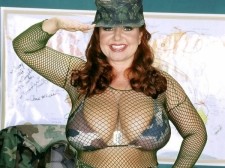 WAC as in Women's Army Corps! This video was Part One of the DVD Ultimate Cherry Brady, written by Cherry at home. Cherry has many more talents in addition to creative modeling. A Voluptuous subscriber herself way before she submitted her at-home photos, Cherry knows what is in the mind of the breast man and what he loves.

Dave is currently preparing the 20th anniversary of Voluptuous magazine (established in 1994), so he and I have talked about the big year that Cherry's first pictures appeared in V-mag (2003). We still marvel over the number of amazing new models in 2003.

Cherry is nothing less than outspoken about big boobs, their place in our lives and Voluptuous.

On top of that, Cherry herself is a fan of the other V-Girls.

"They are all great. But I like when they talk a lot, and I was watching this video the other day, and it has Natalie Fiore in it, and she talks so much! And she has this accent! She is just rubbing her tits and talk, talk, talking like, 'Oooh ju know ju want me Babee...' and I loved it. I was like, 'Oh, you hot slut, you!' I like when a girl talks a lot and interacts with the viewer."

Which is exactly what Cherry does in this and in all of her other videos, both alone, with other girls like Angela White and with the stunt-cock.