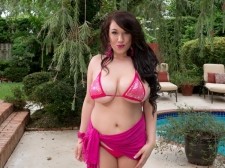 "I'm pretty proud of the fact that I've got curves," say Bex Shiner. "I want to eat. I want a Pop-Tart! People in England should be proud that you have big boobs. You should embrace them and not stick to leaf diets."

This is sound advice to all girls brainwashed by garbage on TV and in magazines to believe that they should be rail thin and wear hideous clothing designed by freaks.

Bex is spending the day at a secret hideaway with high walls in Miami. We brought the swimming pool. Bex brought her bikini which doesn't stay on too long although she looks great in it. Time to get wet and slippery.

Bex is far from ready to get married and have kids.

"Not yet! I think I'd like to do a bit more of getting my boobies out. More stuff like this. More fun first. Modeling for SCORE is fun. I'm only 26. That's quite young. In my head. I'm one of those people who doesn't have the ability to grow up. I'm living in never-never land, like Michael Jackson. I want to do more reality TV. I'm more about showing my boobs than having sex on-camera."

Although Bex does want to raise a family one day.