Tonisha Mills – Birds of a feather shower together

Birds of a feather shower together 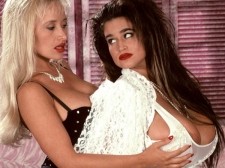 In this video, they chuck their clothes and shower together, getting fast and loose with a hand-held shower head.

I don't know what Tonisha does these days. She dropped out of sight in the mid-'90s. One of the superstars of the Big '90s, Tawny's now a housewife and mom after a successful feature dancing and SCORE magazine career. I haven't seen her since 1998. I found her to be one of the quietest and reserved dancers of the SCORE covergirls.

This shower scene is one of several videos Tawny and Tonisha made at the SCORE studio in the United Kingdom. There's super-rare footage of Tawny, Tonisha and Deena Duos walking around London causing trouble that's posted at SCORELAND. They flashed their big boobs in the street with the Thames and Big Ben behind them and in general drew crowds of normally unflappable Brits.