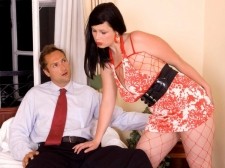 What do I know about Terry Nova? Not a heckuva lot, even though I spent four days with her in Eleuthera, The Bahamas in 2007 and an entire week with her in Hungary in 2008. I wish I could give you some great insight into her personality, but I don't speak Czech and she doesn't speak much English.

Now, it would be easy to call her quiet, reserved and shy, but how do I know that? SCORE model Kristy Klenot, who joined us on that trip to Hungary, told me that "Terry would surprise you. She's a lot wilder than you think," and I suspect that's true. First, why would Kristy lie? Second, whenever I saw her hanging out with Melissa Mandlikova, which was most of the time in Hungary, they always seemed to be giggling and laughing and talking a mile a minute in a language I didn't understand. But I suspected from the looks on their faces and their actions that they were talking about sex and tits. Isn't that what big-breasted girls talk about?

She keeps speaking in Czech. Finally, she stops speaking when she fills her mouth with his cock. She sucks to the root of the cock, taking the shaft all the way down the hatch.

After this scene was shot, I saw Terry walking back to her room. I said hello. She said hello and smiled. It was that same smile I saw when she was talking to Melissa. So there you go.