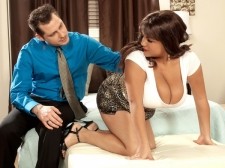 Tatiana has stored cellphones in her deep cleavage. She stores something else between her tits this time.

"You have to be sexually open to do this kind of modeling," said Tatiana who came to SCORE when a former boyfriend suggested that she would be great as a model. "I like experimenting, too. If I don't, then I get bored."

The first time we saw Tatiana, we couldn't wait to see her naked. She has one amazing rack and she's as cute as hell... a real cuddle-bunny.

So what does this power-pixie expect from a man in bed?

"Their cock size doesn't really matter so much as the way they use it. I have been with some pretty small guys who just knew how to hit the right spot. They just have to know what they're doing. I think that the guy's technique is really important when it comes to having sex."

Look at her tits as a gift. Guy gifts.

"It's like giving kids new toys. They just want to play with them, and they're like, 'Oh my God, this is so fun!' It's like they're amazed and they can't get enough."

And that's the truth from Tatiana.