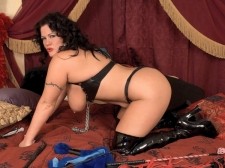 Slone was docile and complacent in her straight-on hardcore fuck videos. The guys took control and dominated her sexually. But she has another side, the ball-busting side.

"There's a difference between a stripper and an entertainer," Slone said. "An entertainer actually does shows and performances. I'm a performance artist. I do role playing and really make it a performance instead of just the good old bump and grind.

So how deep does Slone's bitch mistress performance extend into her sex life?

The answer, my friend, is blowin' in the wind.

"I'm afraid this may sound kind of boring, but I like regular intercourse," she said. "I like oral sex, but intercourse is my favorite."