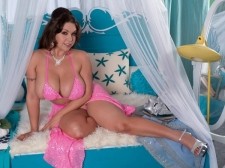 Sheridan's a neo-classic SCORE covergirl with a second magazine cover already completed. She's a cam-girl who loves crazy toys. Miss Love's a spokesmodel at adult conventions and occasionally emcees karaoke nights at a Vegas nightclub. She would have been a sailing mate on one of SCORE's Boob Cruises in the 1990s had she been part of that decade's generation.

Even with all that, Sheridan says she's bashful. With all the strip clubs, many of them super-clubs, to choose from in Las Vegas, Sheridan doesn't seem to want to dance topless or naked on a stage. She does go to strip clubs as a customer to check out hot chicks and get lap dances herself. "I'm kind of shy. I love to show off and everything, but with stripping, I would get shy. I'm scared to do it on stage."

After climbing into bed, Sheridan gets down to the bare facts, slicks her sexy body up and picks out a couple of her favorite toys to pleasurize herself with in this cam-show. "I'm a collector of all kinds of sex toys. My goal is to eventually have a toy that matches every outfit I own!"