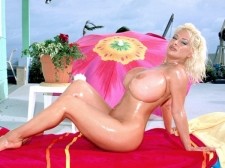 MBO was the second big movie project that year. The first was On Location Key Largo. MBO was like a beachside mini-Boob Cruise without a ship. The stars of the film were some of the biggest names in big-boob show business: SaRenna, Minka, Casey James, Kayla Kleevage, Plenty UpTopp and Maxi Mounds. Larger-than-life women in every way. They appear with SaRenna at the end of this scene. Well, their oily hands do.

The shoot was a study in controlled chaos because there was so much going on all over the place. Plus, the weather was not friendly and there were worries about a possible tropical storm. Luckily it didn't happen, although the winds were high, hampering some of the shoots. With all of that going on, we found the time to shoot an extra SCORELAND "Titan" Special with different material.

The girls lived together under one roof that week, making events inside the house as colorful as what went on in the movie. In the evening, everyone found different things to do. Casey James and Dave talked a lot about baseball. Casey is a big baseball fan. Minka adopted a stray kitten and mothered it all week. She has six or seven little dogs at home, so that was no surprise. Kayla was early to rise, went to bed late and communed in the evening with the other girls and SCORE crew on the patio overlooking the ocean. Plenty grabbed tits, showed her pierced pussy a lot and complained that it was difficult to masturbate with so many people in the house. SaRenna read a lot and brushed up on her painting, having brought her canvases, paints and paperbacks along.

The crew, if not the ladies, came back exhausted with bags of video tapes they transformed into the DVD Mega-Boob Olympics, to this day, a strong seller because of the cast and because there's nothing else like it.