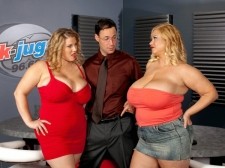 Feature movies are a different form of adult entertainment. DVDs come into two separate formats. There's the compilation of different, unconnected scenes that may be linked by a common thread, like Big Tit A-List. Then there's the feature, a full-length movie such as K-JUGS. This video is one of the chapters from K-JUGS, an XL Girls presentation with an all-star cast (Renee Ross, Samantha38G, Bailey Santanna, Jade Parker, Brandy Ryder and Reyna Mae).

As an editor, I'm often asked to write scripts either for scenes or for features. I went halfsies with another editor to write the script for K-JUGS. It's a take-off on the sexual hijinks at a radio station where all the women have tits that could crush your head. Some of the inspiration came from classic films in which the basic theme is that an established star is angry that a newcomer will usurp her position, leading to trouble.

In this scene, the climax (a real climax) of the film, Renee Ross has a nasty threesome with Samantha38G and a guy. Renee is the up-and-coming disc jockey and Samantha38G is the established station star. Their station manager Mr. Bosworth is caught in the middle, in every way. Especially his cock when they decide to have a fuck-off to establish who will be the queen bee of radio station K-JUGS. It was a meeting of two superstars in real life, too. Samantha started her modeling career around 2002 and Renee came along in 2009. Together, in their only team-up, they were fucking hot. Here's my advice if you love the larger ladies. Buy this DVD at eBoobStore.com.