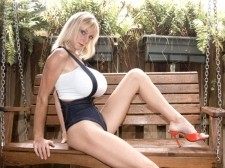 I'm going to let you in on some inside information that won't become news for several months, when the January 2014 issue of SCORE goes on-sale: Morgan Leigh is a nominee for the SCORE Big-Boob Hall of Fame. That's quite an achievement for a girl who got her start when she sailed on Boob Cruise 2000 and only imagined having a body like some of the girls on the ship. Morgan super-sized, became a top dancer in her native England and went on to become 2006 Newcomer of the Year. I think she has one of the greatest slim 'n' ultra-stacked bodies ever.

"The 2000 Boob Cruise changed my life," Morgan said. "I gave up a career in the food industry, and now I've done a lot of modeling in Europe and the U.S. Being in SCORE was a big goal for me, and being Newcomer of the Year was something I never could have imagined."

"That's because I practice a lot!" Morgan said.

"I love playing with myself on camera, and I love going out on location and people watching me," she said. "It gives me an extra thrill to know that I'm being watched. I think every model has to be a little bit of an exhibitionist. We're showing off our bodies for the entire world to see!"