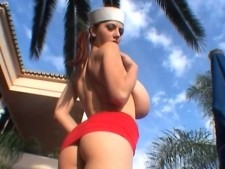 Merilyn is now SCORE magazine Newcomer of the Year 2005, beating many hopefuls, such as Bea Flora, Amber Brooks and Summer Sinn. However she's lost the Voluptuous magazine Newcomer contest to Poland's Bea Flora. Call this tit for tat. Or tit for tit. The voting margin was thin in the V-Mag, with Bea winning by less than two hundred votes. While a handful of people thought Merilyn was too thin for Voluptuous magazine, most of the voters were highly impressed by her and did not feel this way, hence her high ballot count. Congratulations are due to Merilyn for her SCORE win, which is actually no surprise.