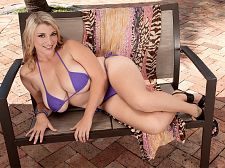 Now tipping the scales at 36H up from 34G (you've seen Melissa's re-measuring in the Behind The Scenes Voluptuous video "Melissa's Cups Runneth Over"), Melissa Manning brings her wonderful, bikini-clad body to SCORELAND for an end-of-summer blow-out or should we say bust-out.

At poolside, Melissa models her skimpy purple bikini. She steps into the water and wades chest high--enough to show that natural boobs do float. Undoing the string of her top, Melissa's boobs bob in the water. It's a sight to cherish and fixate on. Nature has sure been generous to this lovely peaches and cream cutie.

Melissa leaves the pool and gets on a recliner. Armed with a bottle of clear sun gel, Melissa squirts her massive mounds and rubs the stuff in well, massaging and fondling those whopping wahwahs. They shine in the sun as Melissa shakes, swings and squeezes them. The flesh undulates as she grips fistfuls of breast meat. Her hands cannot hold more than a fraction of their volume. This girl is more than a real handful, the very essence of voluptuousity.