So here's Linsey in her strange laboratory doing rude things 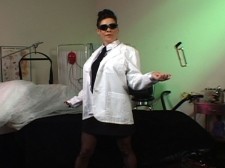 But Linsey is different. Linsey is a talker and she knows what to say to get guys off. She could get you off with a phone call. She never needs a voice coach. She knows that one key to sexual stimulation is what happens between the ears not just between the legs. When it comes to talking hot and nasty or urging the viewer to join her and wank, Linsey is one of the best. She has a way of speaking and using her eyes that makes the viewer feel like she is directly talking to him.

We don't have a photo set that matches this video so we've included a rare pictorial of Linsey with Kelly Kay, an English girl-next-door bra-buster and SCORE covergirl.