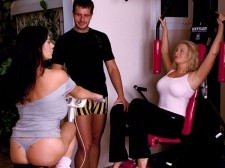 The first time I interviewed Linsey Dawn McKenzie was in 2001. Linsey had just gotten married, and Elliot James and I sat in SCORE chief John Fox's office interviewing Linsey and her new hubby over the phone. Many of us were concerned that Linsey's marriage would mean the end of her modeling career, but towards the end of the interview, she told us "I'm still Linsey Dawn McKenzie and things are really going to heat up now." Before long, Linsey was fucking on-camera for the first time with her new hubby.

The second time I interviewed Linsey, the setting was a lot more intimate. The interview took place in a bathtub in the SCORE Studio. Linsey was in the tub. Unfortunately for me (but fortunately for viewers), I wasn't. This was in 2002, shortly after Linsey's first boy-girl, which was a huge hit, one of our best-selling movies ever (I think the video was at No. 1 on our Top 10 list for about a year and on the list for several more years).

Now, I have to tell you, I was having a hard time concentrating on my questions with Linsey sitting in a tub with her big naturals floating in the water. But I do remember her talking about how she had always planned to do boy-girl one day and had carefully managed her career until the timing was right to go all-the-way. She also was non-committal about whether she would do a second boy-girl.

As Ellliot wrote on SCORELAND, "Linsey and Veronika tell the trainer he should also lose his clothes and he does when Linsey grabs his cock out of his shorts and wraps her lips around it. The girls take turns slobbering his knob. Veronika grabs the shaft and works on the head while Linsey goes for his bag, sucking one nut at a time. Then they switch and Linsey inhales half his bone down her throat before giving it to Veronika. The girls give Trousersnake a lot of lip service before he gets to fuck Linsey's tits. Linsey takes it deep doggie style while sampling Veronika's pussy. The trainer eventually shoots a huge load onto both girls as they kiss and offer their incredible, wet-dream boobs for a woman's ultimate reward, a deposit of male batter, with most of the spunk landing on Linsey's chin and neck."