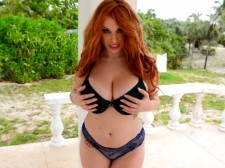 Pretty Lily Madison tries on a selection of bras and stress-tests each one. One of Lily's tests is the shake test. Does Lily have a shake test for her panties also?

Which bra does Lily look the breastiest in?

Lily has one of the best bodies. She's slim and stacked with an hourglass figure. The shape and projection of her tan-lined natural big boobs make them addictive. Looking at them raises brain chemicals that produce euphoria.

Originally a web-cam girl, Lily is the covergirl of March '14 V-mag, hitting stores worldwide on Christmas Eve. Her popularity will explode when her face and bod are seen on thousands of store racks.