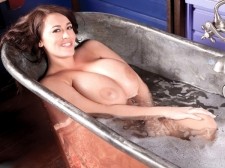 Today's a big day because the day many SCORELAND2 members have been clamoring for has arrived: the SCORELAND2 debut of British J-cupper Leanne Crow, one of the most-popular girls of the past five years. We've been waiting for Leanne's debut, too, which might have you wondering, "So why didn't you post her sooner?" Well, we have guidelines here at SCORELAND2, guidelines that separate this website from SCORELAND, SCOREVideos, XLGirls, etc., and justify the bargain price of under $10 a month. And one of those guidelines is how much time must pass between when a video is first posted on our premium-priced websites and when it can appear on SCORELAND2.

This video and the accompanying photo set were shot on the final day of Leanne's first SCORELAND shoot. We flew Leanne all the way from her native London, England to St. Maarten for the big event, and by this time, Leanne's rookie jitters had gone away and she was much more relaxed in front of the camera.

"I've had such a fun time here in St. Maarten but it's time for me to take my bath, get ready and go," Leanne says.

But before boarding her flight back to England, Leanne wants to freshen up so she can look hot on the jet. She soaps and suds her beautiful tits. She jiggles and bounces them, shakes them hands-free and palms them up and down, the breast flesh undulating and swaying. Leanne soaps and repeats, squeezing and slapping them together. It's great stuff.

Leanne is a true force of nature. She once told us, "I always wanted to have big boobs. I used to literally pray every night for them. I would pray over and over that I would get boobs. I was this flat chested geek. It was crazy. If you saw a picture of me then and one of me now, you wouldn't believe it. I was literally flat as an ironing board. I used to tell my mom all the time that if I didn't have boobs by the time that prom came around, that I was not going. I mean, I always envisioned myself in a long dress with cleavage at my prom.

"Then, a few months before my prom, I went from nothing to a C-cup. They just sprung out and all of a sudden, I had boobs. They grew almost instantly from a C-cup. They just kept growing and growing and growing. And then I went to get measured and they were like, 'You are an F-cup.' And I was in shock. I was buying C-cup bras and I was an F-cup! I was busting out of my bras, but I thought I was, like, a D-cup."

Now she's a J-cupper and one of our greatest naturals ever. We're thrilled to present her at SCORELAND2. Once again, Leanne's time has come.