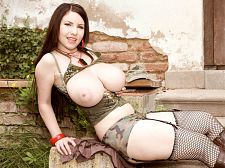 Karina is dressed for battle, or maybe some guerrilla warfare. Could your cock survive a confrontation with a pair of H-cup naturals? Karina's camouflage isn't going to do much good when she has those huge missiles protruding from her chest, ready for launch, clearly visible from satellites circling the Earth. "I've never been able to blend into a crowd," Karina said, stating the obvious. "But I think I would make a very good army commander. My troops would always be standing at attention!" Here, the focus is on Karina's big rack, as usual, with plenty of attention paid to her second most impressive asset, her ass. "Believe it or not, I have known many men who didn't even notice that I had big breasts because they were always looking at my butt," Karina said. "But most men like my breasts and my butt." And your pretty face, Karina? She pouted. "Yes, but sadly, men are more interested in tits and ass." Tell us about it. By the way, Karina said she has never had anal sex but is interested in trying it one day. "Maybe one day, a man will catch me by surprise." A sneak attack? Sounds like a sound military strategy.