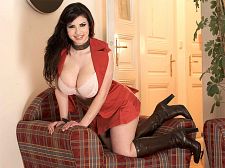 Karina comes out wearing a little red top, a little red dress and a pushup bra showing cleavage. She doesn't say a word and starts kneading her tits. Her hair is down, her lips are done up like she wants to wrap them around your cock, and then the camera zooms in as she bounces her bra-bound breasts and squeezes them through her top. She quickly opens her dress, still not saying a word, exposing a beautiful, lace bra that seems to have been designed by one of the engineers at M.I.T. She takes out one tit, rubs a nipple then licks it, and damn, that baby looks heavy! Then she pulls out the other one, bites her lip, kneads her naked tits and bobbles them into the camera. Her nipples are as hard as your cock, and the breast show continues! Later, she spreads her pink pussy wide, almost gaping it, and rubs it hard, moaning, but the real fun is about to begin. She pulls out a gigantic red fuck toy, the biggest we've ever seen her use, wraps her tits around it, and then moves it down to her pussy. Can she take it? Watch and see.