Janet Jade – Sweatin’ With The Titties

Sweatin' With The Titties 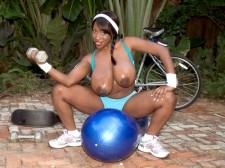 Janet Jade is one of those girls who defies words. Even Christy Marks, SCORELAND's Model of the Decade for 2000-09, was bowled over by Janet and her full, heavy, swinging DDD-cup naturals that make her a great SCORE Girl and big, round booty that makes her a great BootyLicious girl, too.

Janet, who was born and raised in Detroit, Michigan, was a cheerleader in high school. Imagine that.

"I was the girl who could dance real good who had big boobs," Janet told me. "It was kind of a problem. I would just shake my pom-poms because I couldn't jump up and down with my boobs flying all over the place. I'd wear a tight-fitted unitard or a skirt with a bra, but there was no way I could hide my boobs. I knew people were looking at me and reacting to me. There's no way you could see my boobs in a cheerleader's outfit and not notice them, but people didn't say anything. I definitely saw them looking all the time."

Back then, Janet didn't like the attention. Hey, she was in high school. But later...

"I really didn't start to like my boobs until I started dancing when I was 19. Then I realized how much guys liked them, and the attention was good."

There are so many things I love about Janet. She's one of my favorite models ever. Her body is incredible, 100% fuckable, plus she's a real girl-next-door who never cops an attitude, plus she has a sweet, baby-doll voice. She's irresistable. SCORELAND members voted her No. 62 for 2000-09, which has to be the greatest injustice ever. I would've put her in the top five.

Okay, I admit it, I'm infatuated with Janet. How can you not be?