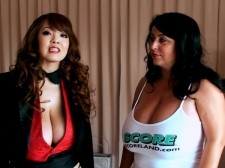 A rare meeting in a behind-the-scenes video. It doesn't get more rare than this. Two boob goddesses meet and learn about each other. And what do they learn? Some of what they learn are hot words! Hot words for cool chicks.

Hitomi is asked to describe her impression of Mexico. She has never been there before. Hitomi's translator and girlfriend is at her side to translate from English to Japanese and then back again.

"Hot but beautiful," Hitomi replies. She giggles a lot. Always so happy. What does Hitomi want to do most of all in Mexico. "Eat tacos," says Hitomi, using a hand gesture to make a point which gets everyone laughing. Hitomi uses the word "taco," not a Japanese word for it. Apparently there is none.

And then the stacked super-natural Natalie Fiore comes into the bedroom while Hitomi is changing into a sexy tuxedo costume. She is asked her impression of Hitomi. Natalie declares that Hitomi is the hottest girl in SCORELAND of the last few years. Natalie explains why in her opinion. She is very impressed by Hitomi.

Natalie walks over to Hitomi. The idea is for Hitomi to teach Natalie how to say certain words in Japanese. Words such as "boobs." "Big Boobs." "Sexy." "Ass." "Mouth." "Tongue."

If only the United Nations could get along like this.

See More of Hitomi at SCORELAND.COM!