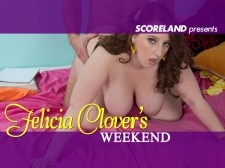 "I'm a good girl but not in the bedroom. I'm a bad girl there. I am a freak when it comes to sex!" Felicia says. Which is why Felicia walks around campus with the bottoms of her bubbled ass cheeks spilling out underneath her tight butt shorts and a very low-cut sweater to show off her huge knockers.

"I do have a nice booty," Felicia says in the understatement of the decade. "I want to say that I was not the bustiest girl in high school, even though everyone thinks I was. I really wasn't." Felicia checks her ass-cleavage exposure and her frontal cleavage display in the mirror every day before leaving the house because she is known as the BMOC (Big Mams On Campus).

Studying is hard work. That's why uni coeds packing big boobs like Felicia need a special kind of study break to settle their boiling hormones. Too much booking and not enough banging is not healthy for a hot young redhead. Some relief is needed. Felicia's tutor will help her relieve the stress of higher education with a nice fuck on her little coed bed. Give Miss Clover an inch; she'll take eight or more.