Giant tits that engulf any cock 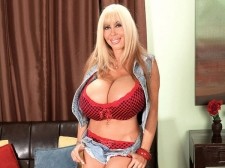 There's no one as skilled or as confident in draining a man's nuts with her gigantic tits, soft palms and sure grip than mega-boobed super-sex star Elizabeth Starr who came all the way from Los Angeles to play at SCORE.

With the exception of Minka, Kayla Kleevage and a handful of others, few have Elizabeth's fantasy jugs. Guys walk into parking meters when they see her.

Elizabeth has a trim bod, long legs and a tiny ass and keeps herself in shape with regular gym sessions. Her look has been compared to a living Otis Sweat painting. In this video, Elizabeth blows out a red two-piece under tiny denim shorts and a denim top.

"I just wanna play with my titties," says Elizabeth as she jacks and tit-bangs a service-dick in this scene. "It's all about the titties. I just wanna put that cock between my titties and smother it. Lizzie just wants to smother it."

And that she does. She gives until it squirts.

"This is the sort of thing I would have gone crazy for as a young fledgling boob man back in the '90s. And you know what? I STILL go crazy for this sort of thing!" adds Jared.