Destiny Rose – “Are You Ready For Your Sponge Bath?”

"Are You Ready For Your Sponge Bath?" 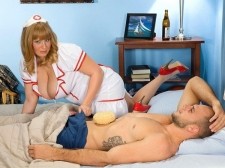 When Ohio cutie Destiny Rose first came to SCORELAND in July 2009, she didn't do hardcore. Seven months later, she still wasn't fucking guys on-camera, but we wanted her to appear in the feature film More To Fuck so much that we paired her with Kaytee Carter for a girl-girl scene. Well, something happened during that shoot. Destiny saw all the other girls in that movie fucking guys, got turned on, went home, thought about it some more and decided to go all-the-way the next time she returned to our studio. That was in September 2011, and the movie you're about to see was Destiny's second boy-girl.

"It's really crazy," Destiny said about taking the hardcore plunge. "But why not? I'm a nympho, and I've always had a fantasy about fucking a guy on-camera."

Destiny is no stranger to pleasing men. She's a stripper back home, and she told us that she gives lap dances that make guys pop in their pants. I'm not surprised. If Destiny sat on my lap with her big ass and shoved her big naturals in my face, I'd pop, too.

Destiny has a story that's not uncommon among big-boobed girls. She started developing early. By eighth grade, she was the bustiest girl in her class. Her classmates made fun of her. Why anyone would make fun of big tits is beyond me.

"They would all call me names and mock me," Destiny recalled. "It was petty but that's how kids at that age act. They said things to me like big-boobied ho and they called me Tits McGee."

Destiny was a geek. She wore glasses and dressed like a nerd. "I was a choir geek," she said.

Unlike this scene, which was over two years in the making. But I still say it was destiny.