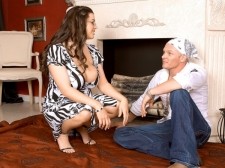 One of the great trends over the past five or 10 years has been the number of stacked SCORE and V-Girls who are readers' wives. There was a time, back in the 1990s and early 2000s, when we wouldn't even mention if a girl had a boyfriend or husband because we didn't want to spoil the fantasy of the girl being untouched or available. But then (and I think this came with the popularity of MILFs, although most of the girls I'm referring to are not over-40), men started to become excited about the idea of seeing someone else's wife or girlfriend.

I'm with those guys. I've never fantasized about marrying or going out with a SCORE or V-Girl, just fucking her or jacking to her. That's enough for me. And if I'm looking at someone else's girl? Even better.

Different strokes for different folks. Me? I'd have my eyes on the Dallas in front of me the whole time. But I'm glad Mr. Dixon was willing to share his wife with us. We need more men like him...as long as they have wives like Dallas.