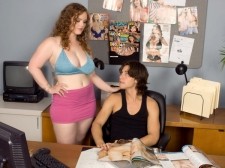 "I'm an exhibitionist," says Contessa Rose, whose first XXX video was for the SCORELAND special "First Fuxxx." "Anything that involves the outdoors or groups of people or even one guy watching me turns me on. Having real sex with a guy in front of a camera knowing that lots of people will be watching is an even hotter fantasy come true. It's way different than having sex in private at home. It's difficult to explain in words. The energy is so different, more naughty and forbidden. Before I did it, I was thinking and fantasizing about it. Also the idea that people are watching my every move is very exciting."

Contessa Rose was one of the stars of the DVD Boob Science. During a break in the filming, Contessa, an accomplished belly dancer, showed off her skills and gave co-star Eva Notty a lesson in the erotic, ancient art. In Boob Science, Contessa has an asshole for a boyfriend. Daphne Rosen zaps the asshole to never-neverland so the character played by Seth can fuck Contessa. In this scene, Seth is the asshole. Thinking he's complimenting Contessa, he says things to her that would get most of us slapped but gets him fucked. So sometimes it pays to be an asshole, sometimes it doesn't. I'm going to say that mostly it doesn't, but who knows?

Anyway, Contessa, who's from rural Georgia, had never fucked on-camera before she came to SCORELAND. For us, she fucked four times.

"One of the biggest rushes of my life," Contessa told us. "I came about 20 times!"

Anyway, before she came to us, Contessa was a waitress. She likes Tim Burton movies and Anne Rice books, spikey heeks and corsets and fantasy art.

Hey, the pleasure was all ours. And Seth's.