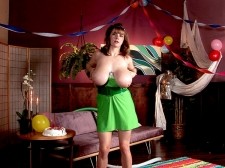 When Christy first started modeling, it was around her birthday, so we threw her a birthday party and gave her streamers and poppers to play with, which she LOVES. Then we filmed it in 3D and put it in one of her first DVDs "Rack-O-Rama". Well, to date, it is one of her favorite scenes. So we're going to give it to you now because she felt it should be on her site since she liked it so much. Unfortunately, it's not in 3D, but we will say that we do appreciate her orgasm at the end. Enjoy!