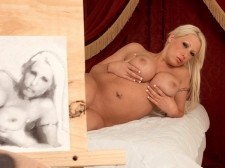 And she did, no more than seven months later.

Fair enough. Do what you love.

"I like watching myself fucking on video. It turns me on, especially afterwards when me and whoever I'm with watch it together, and he gets hard again and I'm still wet, and we do it all over again. That's fun!"

"Everything about me, everything I did growing up, was so shocking to them. Even the stupid things like body piercing, different-colored hair. I've been through them all. They kicked me out of the house a few times because they'd never seen anything like that. And being out and partying and making out with boys and drinking drove them crazy. They couldn't control me. Just typical high school stuff, but for them it was like, 'What's going on? What's wrong with her?' But I got all of that out of my system while I was young, so that's why I'm tame now."

Tame, Candy? You could've fooled us.