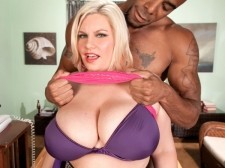 Bailey Santanna is the world's greatest girlfriend. There are two reasons I know that. One is that she told me.

"I'm really nice," she said. "I never get mad. I'll cook you breakfast and dinner every day. Do all the laundry. Clean house. I always have my own money. Never need anything."

The other reason I know she's the world's greatest girlfriend is because I've seen her fuck. In this scene, she takes Asante Stone's big, black cock up her ass. Any girl who can do that has to be a helluva girlfriend.

"I always please my man," she said.

In this scene, Bailey knocks on Asante's door. He's home watching TV. She introduces herself and tells him that she's locked herself out of her apartment. He checks her out while she calls the locksmith and admires her big booty and big tits. The locksmith won't be there for an hour, so Bailey asks if she can hang out in the apartment while she waits. But Bailey doesn't just wait. She sucks cock and fucks. She takes it up the ass.

Bailey is a young girl who has been modeling for a long time. She made her Voluptuous debut in 2002, posing solo, and then she disappeared. Completely dropped out of sight. What had she been doing?

"I was a stripper, and someone came in and gave me their card and said, 'Do you wanna shoot for me?' and I said, 'You look like a phony,' and he said, 'Call my studio and my secretary will answer and you can look me up on the Internet,'" she recalled. "So I did. He was just a private guy. Some rich guy. But he did have this whole big studio, and he shot a bunch of videos and photos of me for years and years. He did like 15,000 pictures of me, something crazy, but it was all for himself."

Bailey was born in Minnesota, moved to San Diego, California (where she shot her first V-mag pics with a freelance photographer), then moved to San Francisco, California. She's really into costumes and outrageous clothing styles and used to be a regular at the Burning Man festival in November. Last time I saw her, she told me she was moving again, but I have a feeling we haven't seen the last of her in the Voluptuous and XL Girls studio.