Angeli – Brassieres Are Toys For Angeli

Brassieres Are Toys For Angeli 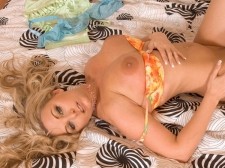 As most veteran SCORELANDERS know, brassieres are a big part of the boob culture at SCORE. Bra and panty shoots. Bra measuring. Asking models their bra-shopping habits. Autographed bra giveaways are very popular in the magazines. In many of our interviews and videos, the models try on different bras in different cup sizes.

There have been some classic bra-oriented videos I still watch, like those starring Cherry Brady, Angela White, Cassitty, Kellie Garnett and Minka. I love watching women put on and take off bras. Every girl has her own technique. I love seeing how their tits bulge and nestle in their cups. I may have missed my calling as a bra fitter and bra store owner, but then I wouldn't have met all of these bigger-than-big SCORE and V-mag Girls.

The photo set is more of a real bra show. Angeli also plays jazz hands with baby powder and leaves an impression. I've never seen that before or since.

The studio manager did ask Angeli about her bra habits.

"I can spend hours in the store trying on bras," Angeli said. "But you know, I found that guys don't like to go with me. They say they get bored and would rather go off on their own and meet me later."

Angeli's boyfriends don't behave like they're tit-men. A SCORE Man would sit all day in a bra store as Angeli walked in and out of the dressing room wearing different bras. Actually, he would sit in the dressing room and watch her try them on unless the stern lady owner with her hair in a bun asked him to sit outside.

See More of Angeli at SCORELAND2.COM!